So there was much discussion back and forth about who the big DC hero coming out was and it’s been announced: 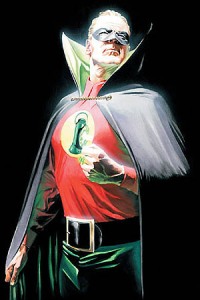 So whipping out my comic book cred a bit. Alan Scott is not the Green Lantern most of you know. He’s very rarely appeared in media beyond the comics. His original origin had nothing to do with the Green Lantern Corps (or as I like to call them SPAAAAACE COOOOPPS!) it had to do with him finding a green lantern fashioned years ago in Ancient China that instructs him to make a ring which it then empowers.

So number one why this “coming out” is bullshit is that Alan Scott is not a major superhero any longer. In most recent comics he’s taken on a more wise elder mentor role but he’s not a huge name. Also it’s not a coming out of Alan Scott, if they were keeping him in the main continuity and having an older man come out as a gay man long after he had kids who are now adult I would be  all over this. We so rarely get the POV of the older man coming out of the closet post-family and kids that it would be extremely interesting to see it in a superhero context.

That’s not what they were doing.

What they are they doing are retconning the whole thing.  Alan Scott is not in the main DC universe. He’s no longer an older man with kids, he’s a young hero on Earth-2.  So he’s not in the main storyline, he is no longer the mentor to Kyle Rayner or the father of Jade and Obsidian (we’ll come back to this later) instead he is on a different earth. Okay do I really need to explain the issue with taking a character, reinventing them as GLBTQ and then shunting them into the secondary world (tertiary? quartary? quintary? who knows with comics?)?

Now we come to my main issue with the whole retcon of Alan Scott as gay – Obsidian. I’ve read comics from a very young age and I had a weakness for the team comics including Infinity Inc. where Obsidian first appears and gets backstory.  Obsidian was the illegitimate son of Alan Scott and the villainess Thorn and adopted out to an abusive family. He learned of his shadow powers when his adopted father went to knock him through a wall.  Obsidian’s twin sister Jade finds him and discovering they both have powers and based on Jade’s being exactly the same as a Green lantern’s ability they decide that Alan Scott must be their father.

Obsidian eventually joins the JLA with his friend Nuklon. He has a string of bad dates and relationships with women. He struggles with mental health and depression for years and slips into villainy more than once. He also ends up coming out and struggling with his sexuality as a gay man before becoming involved in a healthy relationship with a lawyer.

There are other things that happen with Obsidian of course, merging with his sister, powering an engine that strips heroes of their powers, etc but I’ve hit all the points of his timeline that I remember vividly and had impressions on me growing up. Like many comic book nerds there are certain heroes that we connect with for whatever reason whether it be parallels in their story to our life or they are who you wish to be or just the cool outfit. Obsidian was one of my heroes (along with White Queen, Tim Drake’s Robin, Shiva, Midnighter and a few others).

This retcon of Alan Scott has to erase Obsidian from existence, because he’s young he has no kid. As anxious as I am to have a gay character in comics who is not struggling with his sexuality and is not bullied and has a community of GLBTQ folks around doing it at the expense of one of the few nuanced, flawed, non-stereotypical gay men in comics makes me uncomfortable in the extreme.

doing something new and exciting by introducing a [blank] superhero. Isn’t it amazing! When in actuality they’ve had superheroes of whatever the [blank] is for years they’ve just ignored them and shunted them aside. They could actually take the time to build up one of those characters into a major name instead of a gimmick-y retcon that they’ll reverse in a year that shows us once again the heads of DC don’t know a thing about story or their audience.

Instead of retconning Alan Scott how about you give Obsidian his own book? or Grace Choi? or Thunder? (Grace Choi and Thunder are probably my favorite couple in comics, period) or Pied Piper? or Swift? or Apollo & Midnighter (don’t get me started on the horrible Stormwatch reboot)? or Icemaiden? or Lightning Lass? or Invisible Kid? or Sarah Rainmaker?

I’m not trying to get down on DC for wanting to foreground a gay character but in a year with this sort of gimmick-y reboot fails once again and Alan Scott is no longer gay where will Obsidian be? Where will all these side/disappeared GLBTQ characters be?

Still in the cracks is my guess.